The internet technologies are giving increasing power to citizens. We are now in the midst of the digital civil revolution. This new civil power requires a different style of leadership as ‘one-of-us’- citizens, combined with rhetorical skills and aimed at the common good. That is one vision, still a hypothesis. The other one is that this new civil power will be misused by bad leadership: threatening, divisive, rhetorical skills aimed at conceiling the leader’s own interest (demagogue), provocative for riots.
What will be the outcome in this new battle for public authority? What to do about it in leadership development?

Disruption in markets and marketstrategies has its roots in the new internet technologies. They gave us platforms, apps, websites and social media. This last one changed fundamentally the media landscape, by adding a third mediachannel of, by and to citizens themselves. It is directly aimed at them, filled with their own productions and opinions and a powerful tool for their bottom-up organization of public protest and opinion (‘swarm behaviour’ and ‘permanent public grandstand’). It now also leads to disruption of democracy, politics and public services, because it gives new power of information, data, exchange and self organization to citizens. It’s no longer just about technology, but about power, institutional change and so, also in changes in the necessary public authority and leadership. It can be analyzed as a ‘digital civil revolution’, because it is not just a new phase in an ongoing industrial revolution, but a totally new phase that changes not just industry or economy, but also societies, worldwide humanity, institutions and politics.

“… not just a new phase in an ongoing industrial revolution, but a totally new phase that changes not just industry or economy, but also societies, worldwide humanity, institutions and politics.”

Of course, because these revolutions take time to make their big effects, we are now in the middle of experiencing and observing its nature and impact. At this moment we can only come up with hypotheses about the new kind of public leadership, that is necessary or more fitting or gaining dominance in this fundamentally new strategic context (which of course will influence other kinds of leadership).

At the ILA conference in Ottawa in 2019 I discussed if these disruptions will lead to the dominance of civil leadership. In this Round Table many agreed certainly with the strategic analysis of the ‘digital civil revolution’. At the same time there was much doubt if it was not too naive and optimistic about civil leadership as the most fitting new leadership, missing the bad leadership that was using these same channels to convince citizens or spreading fake news or gaining followership for wrong intentions. Beneath this there was of course a discussion about the influence of the ownership by the commercial providers of the internet industry: yes, it is a new media channel to citizens, but they don’t have the ownership of it, neither on the selection of what they are seeing! The participants at the Round Table thought I was right in describing that the new leadership should have an attitude and style of ‘one-of-us’- citizens, but that certainly didn’t mean they would have the right character or the right values that fitted the interests of citizens and ‘the common good’! They then pointed to such succesful leaders as Boris Johnson in the UK and Donald Trump in USA.

So, in the digital ILA conference of 2020, which was to be held at San Francisco, I focused my topic on this next issue: What will ultimately win public authority in this battle for new leadership: rhetorical skills or character and values? Of course I tried to settle this debate on middle ground: The right kind of leadership in character and values will win public authority, from the moment they have better rhetorical skills. So, the battle is not between good and bad leadership, but about rhetorical skills! At this moment many civil leaders are missing these skills, which is then, of course a temporary phenomenon! And maybe, further to be investigated, bad character leads to faster acquiring and performing rhetorical skills? Of course, this was not fully accepted at that time in the discussion in several rounds. The discussion mainly focused on my underlying assumption that citizens know what is in their best interest and that they want to and can look beyond rhetorics to (the right) character and values! This is fundamentally a question about the value and sustainability of (representative) democracy, a discussion that can be expected from this ongoing disruption of democracy!

This question as put in the title will be the next phase in this ongoing discussion about the impact of this new revolution in mankind on public leadership, as a third round in the ongoing yearly ILA conferences. 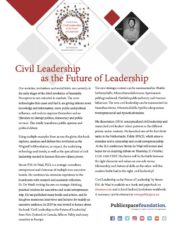