The year 2019 was an inspiring and fruitful year for dr. Steven P.M. de Waal, with many lectures around the world about his latest book ‘Civil Leadership as the Future of leadership. Harnessing the disruptive power of citizens’ (Amazon, 2018). He lectured intensively in many countries in Europe and other continents, like in New Zealand, USA and Canada. These lectures are especially meant to hear the comments and ideas of the audiences, often persons at executive level who certainly have to deal with these new times and so often welcome but also comment the new insights of dr. De Waal.

Because the purpose of these lectures is to reflect on executive practice and increase strategic analysis and practical wisdom at that level, he wrote a reflectionpaper based on this year of intensive lecturing and meeting a lot of executives in these countries.

“Just as with market disruption, newcomers from outside the existing political organizations are increasingly winning the political battle.”

Apart from the conclusion that the themes and strategic analyses in the book are very fitting on the new revolutionary change in the public arena and debate, public services and institutional relations and democracy, there certainly are other conclusions to be drawn.

Conclusion 1: For a new strategic analysis of these revolutionary times we need the new concepts of the book

Conclusion 2: The analysis that we are now facing a #disruptionofdemocracy is certainly recognized, especially in the selection and battle for public authority of political leaders

As he says in the paper: ‘In the book’s analysis, recruitment and candidacy of persons for political positions is no longer the monopoly of political parties but takes place through the new direct channel of the Internet, social media, and news apps. Just as with market disruption, newcomers from outside the existing political organizations are increasingly winning the political battle. If constitutionally application for candidacy must go through a political party, this is circumvented by the founding of new parties (like Macron in France or Zelenski in Ukraine) or by using the (visible and measurable) public support on the new direct media channel to put pressure on existing parties (like Trump around his campaign in the USA).

In a further reflection on the phenomenon of #disruptionofdemocracy he made the analysis that there now is a second level of disruption going on.The first level #disruptionofdemocracy is the winning of elections by outsiders from the classical political organizations and networks. The second level of disruption is that the political arena is losing its dominance in establishing public authority and leadership. It is now disrupted by the bigger and openener public arena, that also opens this arena for private leaders that want to address public isssues, a totally new competiton for many political leaders (see also the special blog on this site).

The overall conclusion here is that #disruptionofdemocracy will first start as disruption of political parties, especially in their function of recruiting, selecting and training politicians!

Conclusion 3: The book’s statement that the only strategic answer in these new revolutionary times must be civil leadership was often doubted and analyzed as wishful thinking.

Many hoped the book was right at this point, but didn’t have faith as they now saw public debates and democratic elections and political leadership performing! The main counter argument we could muster is that revolutions take time, that first reactions are not always the best, that voters also have to learn new responsibilities that are connected to their new power. So the main, not very strong argument is: give us and the citizens time to learn how to cope with this new reality and power, and you will see that this new civil leadership will rise and win the public battle.

Conclusion 4: Will private citizens, administrators and CEO’s take the new social responsibility and public leadership roles? Do they even want to operate in this new public arena, with oldfashioned political leaders as their main competitors?

Many certainly followed the conclusions in the book that there is now an ongoing disruption of political parties and also saw the potential of the opening of the public arena, broader than the political arena, but many also doubted if this is a welcoming new public arena to operate in. In the book it is analyzed as the #permanentpublicgrandstand, and that certainly is not a nice and warm and welcoming environment to operate in. So why would you bother as a private person if you could leave this to professional politicians?

This certainly is a rich and inspirational reaction of the many audiences and administraors, executives and politicans we spoke during our trip. There is much need to further reflect on this, which is the main mission of a Thinktank like Public Space and just the main reason why we wrote this book! 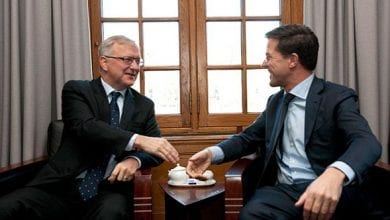